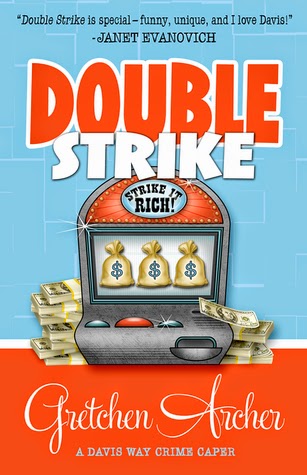 If you were Davis Way, here are a few pointers to begin with your (very chaotic) life:

1. You are on the security force of a casino, sort of a spy on the team.

2. You are not easily ruffled by theft, murder, shooting because that’s what you headbutt on a daily basis.

3. You are the splitting image of your boss’ wife (if you coat an additional heavy layer of foundation, pull on some contacts and spray-dye your hair) and that—unfortunately—makes her your boss too.

4. Your relationship with you boyfriend-now fiancé is as stable as it can ever be… if your ex-ex husband doesn’t rear his shit-head, his mother doesn’t have a plan up her sleeves to throw you under a bus (literally, if she just knew a bus driver).

5. There’s a wedding date looming, but all you can think is, ‘big yay! Ya-ay! Yay? Oh, crap yay’, when your ex-ex husband drops the biggest bomb that leaves you thinking.

So now that we are settled on your character, let’s brief you on your mission. One, your boss’ son is in connection with the son of drug lords for dealing in boarding school which has gained him a suspension. It’s your duty to solve up this ‘mystery’ which you wouldn’t classify as mystery at all, because as far as you are concerned, he’s bad news, his parents just have to realize that. Two, as if these fucking drug lords aren’t posing enough problems for you on case one, they are trying to close down the casino by gambling with drug money? Find out if their legal tender isn’t legal tender at all and get the FEDs on them before they cause over three hundred employees including yourself, to become redundant. Three, the sight of the newest casino manager gives you the strangest feeling, like you know he’s up to something with his little Strike It Rich Casino within your casino to which he’s hired new staff for. Whatever the hell, he’s doing behind closed doors, it’s your duty to find out even if that means getting on some contacts and a different hair colour to work under a thirteen-year-old shape-shifted into the body of a thirty-year-old whose giddiness makes you want to shoot a bullet through your head and hope someone does the same to her just so no one passes through your plight.

As if all the above isn’t problem enough, one fucking lawyer is causing a stir in your family by chairing the divorce between your grandmother and her husband, you have to learn how to use twitter like a pro else you lose your job, your boss’ wife is getting you into the most outrageous gigs because apparently playing her in public with her husband (enough to get your hair, which she supposes it’s hers, burnt!) isn’t enough and your boyfriend doesn’t see no future (kids) with him if you happen to keep your (very dangerous job, not to mention) after the wedding (which you are praying Alabama courts would ever let happen).

Welcome to your life… your life as Davis Way. You have big shoes to fill, unless of course your boss’ wife gives you ones twice smaller than your real size.

MY REVIEW
Do I even need to write a review for this title? Aren’t you tired of me screaming at you to go get all Gretchen Archer’s works??

I adored the storyline! Could I not really? When Gretchen Archer throws in moments you haven’t ever read in any title. One of the reasons I love about Gretchen’s Davis Way series is she takes out all contemporary topics contemporary women face on a daily basis (lack of commitment, career-hungry bitching) and puts a whole marvelous spin with lots of action(!) never pulled off that way in any chick-lit title.──★

Davis Way as usual was fantastic! Beautiful voice, humorous voice and a hilarious way of hash-tagging to completely express a thought other writers would have made her waste a whole paragraph on (Hashtag Impressive). Davis Way never disappoints and she leaves you hungry for more in subsequent upcoming titles in the series.──★★

Oh, I did love the comeback of the characters that I fell in love with in Double Dip (#ThrowbackThursday) and the introduction of some fun, funky characters that made this book #VeryEntertaining. No Hair, the team leader who is always getting pissed at our lead for having the tendency to give everyone a nickname. Fantasy, the ex-women’s prison guard who could slap a fugitive into calming down even when they knew a life-sentence was breathing down their neck. Baylor, the five-year old partner shape-shifted into the body of an adult who would never get serious on assignments. Bianca, the boss’ wife with very high standards for whoever wasn’t willing to impersonate her. Eddie The Ass, the ex-ex husband who’s always in time to remind our lead girl how much of a bitch she is. Bea, Eddie’s mother who hasn’t quite forgiven our lead for splitting the world into #TeamDavis and #TeamEddie in their blood-boiling nasty divorce battle (which to her dismay, led to her son’s fanatics defeated). Hashtag Elspeth, the twitter-nutter who would stop at nothing to teach our lead just how to create the right hashtag topics in her tweets. It’s a characterization party in this novel. #Amazing #JadoreDior!──★★★

My rating is obviously a five star! And I am very sure I’d keep giving a hundred-percent to all the books in this series before they are even conceptualized because… #GretchenFuckingWritesGood!

Double Strike as part of Henery Press’s mystery Davis Way series, “if you like one, you just might (really, really, they mean it,) like all.” Is available on Amazon in both paperback and kindle.

I recommend this book to anyone who’s been a spy or not. Anyone who loves a good mystery in their chick-lit. Anyone who’s turned on by Women Sleuths. And anyone, just anyone who wants anything to keep them laughing out loud. If you very much hate sitting on the edge of your seat during your leisure time, warning, this is not a novel to relax to! But really, how can you relax with a title so fast-paced if you blink you might have to start all over!

My work not done here. Off to post my review on Goodreads.