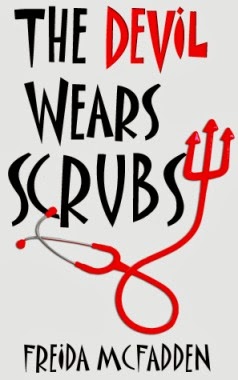 Not literally, of course. But between her drug addict patients, sleepless nights on call, and battling wits with the sadistic yet charming Sexy Surgeon, Jane can’t imagine an afterlife much worse than her first month of medical internship at County Hospital.

And then there’s the devil herself: Jane’s senior resident Dr. Alyssa Morgan. When Alyssa becomes absolutely hell-bent on making her new interns pay tenfold for the deadly sin of incompetence, Jane starts to worry that she may not make it through the year with her soul or her sanity still intact.

Imagine this: You just became a Medicine Intern. All you wish for is your first day to go right as planned and everything falling into perfect order. But you realize there’s a thin line between dreams and realities. Because…
1.      You not-so-late arrive late.
2.       Your resident is the epitome of the devil without the bad red flaming skin.
3.       When all the nurses call you doctor there are scare quotes attached to it.
4.       Your partner intern is a (scheming) DERMATOLOGIST.
5.       All your resident does is to discuss wedding rings with your partner intern and give you the stink eye whenever you don’t have an answer to the cure for Alzheimer’s.
6.      None of your patients recognize your title and keep referring to you by endearments.

For fucksakes, you thought this would be cake. You can handle arriving late. Your resident? You’ve endured high school enough to handle super-bitchy people.  The scare quotes? It’s a nurse thing, probably because they can’t phantom the idea of being there twenty years only to take orders from someone who’s been there for less than twenty-four hours. Your derm intern? Just being nice to her might solve the problem. After all, you are not going to be spending all your days in the hospital. Whenever you get home there’d be some peace. Peace you could use to pee and eat something (since you never have that at the hospital).

All you have is another intern friend fighting tooth to nail to regulate blood-sugar levels of her dearest patient, Val, her cat. And maybe the gorgeous, Sexy Surgeon who you are not sure you want to sleep with or inject a syringe into.

Jane McGill’s life all summed up for you utmost entertainment.


I’ve said this, day in day out, that my most favorite series I can watch reruns of without ever dozing off is Grey’s Anatomy. So is there any reason why I should have scrunch up my brows at this title? Let’s see…

First of all, I dig Jane, the M.C. I thought her voice was fresh and had this Kinsella-like appeal that would want you to keep reading more about her. Perhaps it was because she was too good-hearted or because she was well-crafted. She’s definitely going down on my list for most fav. characters.── ★

Secondly, this book was hilarious. Nothing short of. Maybe it didn’t get me laughing very hard. But it was witty and kept me smiling all along. And everyone knows how I’m such a sucker for humor.── ★★

Thirdly, the cast of characters were amazing. Alyssa Morgan, the bitchy resident who’d insist on our lead girl getting sticky notes because they happen to be ‘effective’ in the medical department. Or Connie, the scheming derm who always wanted to have her way. Nina, the friend who was always worried sick about her cat getting type-two diabetes. Julia, the roommate who was always pissed you’d think she was born that way. Sexy Surgeon, aka, Ryan whose annoying yet sexy tendencies could really be a turn-on (if I was looking to be turned on by a surgeon). They all lived up to the essence of their appearance in the title!── ★★★

Did I love that this book was easy to read and understand despite the fact that my only connection to the world of medicine is my knowledge qualifying every drug as a painkiller? Yes, yes! It’s broken down into simpler forms with all the terms explained in a way, by our lead girl, which didn’t seem like an attempt to label you, the reader, dumb. It’s your Handbook To Avoid Saying ‘Huh?’ Whenever You Are Being Diagnosed. It taught me doctors hated it when they have to stick their fingers into our butts, but do it anyway with a smile because it’s the only sure way to save our lives. It taught me secrets about my dermatologist I would never have known, very treacherous secrets. Perhaps the career-ending book to all dermatologists’ careers. Or that medical interns call a weekend they actually get all two days off, a golden weekend. Much like how we call our own weekends but with more shimmer. So much medical terms all brought to light in a, well, funny light.── ★★★★

Is there a sub-genre in chick-lit called medical chick-lit? Well, if there isn’t, there should. And if there is, Freida McFadden should be made queen of it.── ★★★★★

The Devil Wears Scrubs is available on Amazon. Go grab it!

I recommend this book to anyone who loves their chick-lit fresh, funny and fantastic! Anyone who would want a glimpse into the not-so-glamorous life of a medical intern could also run for this title. Anyone who wants romance to swoon at should also grab this too.

Now, anytime your doctor asks if you know what that medical term means, you can tell him to his face, so he knows just because you are a little sick doesn’t give him cause to think you are sick in the head.

My work not done here. Off to post my review on Goodreads.