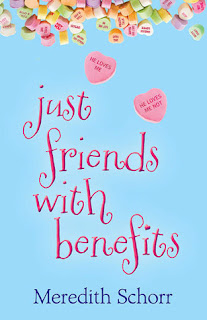 Just Friends With Benefits is so true to life, you will be entertained, shocked and pinning Meredith Schorr on your Must-Read Author vision (Pinterest) board.

So Stephanie Cohen, single paralegal who has a firm hold on her job than her dating life has had her fair share of bad relationships. Including her longest with Paul, best friend now. There’s a good history to it.

Thing is, there was Hille. Back in college, Stephanie had a crush on Hille. Staring At His Back In Class and Watching Him With A Dreamy Gaze Flex His Muscles and all crush. Attending one of his frat house’s parties hoping to score him, she makes an encounter with Paul. The three engage in a conversation where Paul tries to make it all about him and his stupid rendition skills, but Stephanie’s bent on making Hille the centerpiece. Until Hille exits before she could tell him about her crush. So then, Stephanie sticks with Paul for the night. (You know, by ‘stick’, I mean hookup. Wild college days.)

Fast forward ten years, and Stephanie has broken up with Paul, he’s the best friend now. And along with a rowdy crowd of super-best friends which comprise, Hille (single), Jess and Eric (married), Hope and Paul (dating), who fly across the country to hang out, leaving behind their personal professional chaoses. At Hope’s anniversary, Stephanie, with nothing going on for her in the dating department, stares at Hille, the one single person among her friends who is busily typing into his blackberry (of course), wondering if he would have been THE ONE if he hadn’t left the party ten years ago.

To be frank with you all, I did it. The unthinkable. Not reading a blurb before jumping into a story. Such royal treatment is reserved for authors I take on a second time who I know can wow me. And wow did Meredith do.

Was Stephanie amazing, relatable, untwo-dimensional? Of course she was! One thing about Schorr’s books is when you pick them, you know you are reading about her. It’s not all dug up like most authors’. It’s real, it’s her. So saying Stephanie was well-crafted is inhuman. She’s human. You’d find yourself thinking, “What! Stephanie loves Gossip Girl? I love Gossip Girl too!” or “No way! Is Alanis Morissette’s Ironic blaring in the background? Oh, I love that song!” Or “Please tell me she’s not moping over When Harry Met Sally, because that’s my number one Moping Chick-flick (or was, when I was single).” not forgetting, “She loves, Shopaholic and The Devil Wears Prada too! I still have those books!” So relatable, someone you’d feel the strong reader-character attraction every time you pick this title. To be frank, that’s how all Schorr’s books are. Cheers to Kimberly Long from Blogger Girl! ──

The whole Just Friends With Benefits topic should be given a star. It’s the in-thing now and forever. We all have to have a fuck-buddy at some point, but the unique twist of this title gives it a leap over all other chick lit written in this light !

Meredith Schorr hit the jackpot, again. I don’t do this. Comment on one particular character but sometimes some of Meredith’s characters piss me off so much. Like Hannah Marshak from Blogger Girl. Now Craig from Just Friends With Benefits. There’s no one fond of stories with NSAs like I am. But this guy makes the whole thing… Shower After Sex disgusting? Yeah, Shower After Sex disgusting. It’s just so annoying someone can have an NSA and not feel any emotional attachment afterwards. Acting all normal like I Screwed You In The Bathroom Last Night, fair deal. Call me sentimental, or say a ‘duh’ given that’s the whole point of NSAs (on paper, you have to note. A whole different ball game when it’s in practice). But the guy just pisses me off. And I know he would you too. Anyway, such feeling, love or hate is what keeps you sticking to the book, after all it’s the impression the writer wants the character to make on you. But I am not joking, I really did hate Craig. UGH! ──


Speaking of characters, you would love the lot in this book. From Corky(!) and Paul(!) my favorites who delighted me with the humor they brought to this piece. Eric, the big-bro type friend to Stephanie and his wife, Jess. Suzanne, the best friend at Washington insisting on our lead girl’s subscription to Match.com who shed so much light on relationships you’d think you were in an interaction with a professional. Ryan, oh Ryan was the best thing that ever happened to this book. And Stephanie’s overbearing Jewish mum whose talk on Signs He’s The One might be what you need to shape your dating life.

This book wasn’t predictable. Maybe its because I didn’t read the blurb. But you think you have read enough OMGee moments in your lifetime that you might not drop your jaw to anything again, huh? Huh? Oh, you haven’t read Just Friends With Benefits! With one OMG moment that rivals all, you will close the book for hours, thinking “Oh, my God that explains everything!”
This book almost, almost, had a four star from me. Because it was a bit low in the humor department (we all know humor is a big thing for me), and one silly move our lead girl pulled towards the end I could never forgive, the OMG moment that rivals all OMG moments saved it for me.

Just Friends With Benefits, Meredith Schorr’s thrilling debut is available on Amazon in both paperback and kindle.
I recommend this book to anyone who has ever had a fuck buddy or not. Anyone who wants something true to life. Anyone who hasn’t tried out Schorr’s fabulousness yet. And anyone who has friends they’d fly across states to meet (like I don’t). :)

My work not done here. Off to post my review on Goodreads as well as Amazon.
Posted by Unknown at 19:32