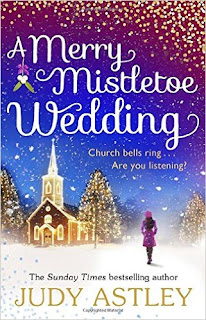 MY SYNOPSIS
Imagine This: You are in a relationship that's been ongoing for almost a year. You love him. You find his surfer-boy charm irresistible. Though you wish you guys lived in the same vicinity and you didn't have to journey miles for quick, blissful shags over the weekend.
Then he proposes. And you are thrown in a whirlwind of wedding preparations. A wedding that's happening on Christmas!

Your whole family is excited for you. Except your sister—who would have been your maid-of-honour—decides she's not going to put her family through the potential snowstorm risk they might be facing at the decided venue.

You want simple. But your fiance's mum wants extreme—"I'm not traveling miles so I could have some hot-dogs on a bench and return." And suddenly a wedding that's supposed to be quick and easy is looking difficult and stressful.

Hopefully, this year the mistletoe would work its magic again and you are going to have an amazing wedding without breaking-down...

Then your ex who jilted you weeks before your wedding comes back into the scene—precisely a few houses away—with his adorable dog... Uh-oh.

Thea's chaotic, Christmas wedding summed up for your delight.

My Review.
Great storyline. Not, really unique, but enjoyable all the same. What with Thea's parents contemplating on moving out into a low-maintenance home, fearing the prospect they might get old and get put in homes? And also, Thea's sister Emily who's going through post-partum depression. A star!── ★

The main characters are Great. It's told in the point of view of mother and two daughters who have funny voices and different, likable personalities. There's Anna, the mum, who's fearing the prospect of becoming an oldie cliche complete with a home and a giant ball of crocheting thread to knit. There's Emily, worried London is no more a safe place to live because someone stole her pram. You'd also love Thea, who has to scream how much She loves her fiance into the phone so her ex snooping in through the back-gate wouldn't miss a word. A star!── ★★

You'd also love the funny cast of characters! There's Mike, Anna's husband who won't take being called old because he's only in his early seventies. There's also Charlotte, Mike's younger ex who's popping in and out of Emily's home without invitation helping out with the kids and helping herself with all their bottles of wine. There's also Rich, Thea's ex who thinks he can win her back by flashing by with his dog. Star to all these characters and more.── ★★★

Though a sequel, it can be enjoyed as a standalone novel. (Not following the stereotype perception about sequels, this sequel is even more enjoying than its prequel.)

My rating:  Four out of Five stars!

A Merry Mistletoe Wedding is available on Amazon.

I recommend this read to anyone who loves their festive titles full of humour, miracles the festive season brings and lots of adorable characters!